Long Range Missiles
Long Range Laser Cannon
Medium Range Laser Cannons
Dual Chrono Break Cannon
The Luxiole is the warship based on the Elsior and acte as its echnical superior and successor. It is the main flagship for the events of Galaxy Angel II and houses the crew of the Eden Armed Forces and later the United Parallel Worlds but most importantly, the Rune Angel Wing and their Emblem Frames.

It was originally commanded by "Hero of the Empire" Tact Mayers before he was made the Chief of the UPW whereupon he passed down the mantle of command to his longtime friend and subordinate, Coco.

Compared to the long design of the Elsior, the Luxiole was designed more vertically oriented and is a distinctly "tall" vessel. Its lower half spreads out in the front while the top half above the wings move backward. The Bridge is visible at the top of the vessel while the living quarters and the more sophisticated rooms are spread out below.

With the discovery of the Chrono Gates and ABSOLUTE, the EDEN universe decided that it was in their right to take command of the remaining technology of ABSOLUTE and reach out into the other universes to seek out other civilizations. NEUE was discovered after many other gates led to dead universes affected by the Chrono Quake Bomb and a new capital ship was commissioned to spearhead the advancement of NEUE's technology. Designed by Noa as the successor to the Elsior and to succeed it to symbolize a new age of technology shared between EDEN and NEUE, the Luxiole's first commander was the leader of the survey troop and distinguished "Hero of the Empire", Brigadier General Tact Mayers. Tact would later pass down the mantle of command to his trusted friend and subordinate, Coco when he is reassigned to become Chief of the UPW. It was used throughout the large conflicts in NEUE including Verel's Insurrection, the fight against the Three Marquis, and the final war against the Will.

As the Luxiole is essentially an upgraded Elsior, it sports both upgraded armor and firepower capabilities. However, it is still a principal flagship of the Rune Angel Wing's Emblem Frames and as such, is rarely in the heat of the battle fighting but more inclined for swift operations. It's main weapons are significantly stronger than the Elsior's and its mobility is shown to be faster. It also has the special function to split itself into two sections that can act independent of each other. The improved Dual Chrono Break Cannon, also made by Noa, is equipped near its wings and as Eigou Kaiki no Toki shows, can be individually equipped onto the separated halves. By Tact's order, it also contains a Val-Fasq V-Chip installed allowing for its subcommander Tapio Ca to manually move the ship in emergency situations and combat.

It is shown that the Hangar is at the level of where the Luxiole's wings are as when the Emblem Frames are deployed, they are brought out by the rails on underneath the wings. Kazuya's Braveheart, Roselle's Holy Blood, and shuttles are deployed from the front Hangar gates.

Luxiole has many crewmembers, but there are 14 of them fully shown.

The top half of the Luxiole contains the complex living quarters and other multitude of functions where the crew work day in and day out. There are two elevators that allow travel across the ship. In terms of how the floors are organized by the ship's crew, it is done in order from Bottom to Top.

Regular occupants of the Bridge:

Another Part of the Hangar. 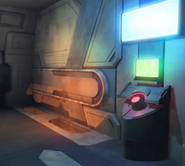 Engine Room with a button

The bottom half of the Luxiole is rarely ever visited but its locations are seen in two occasions. It is presumed that the other, more technical aspects of the ship reside here.

Community content is available under CC-BY-SA unless otherwise noted.
Advertisement